Written in a train in India:

I am in a train that will whisk me to Delhi. In a couple of hours I will be on a plane heading back to London.
Back to grey, bleak London.


The noise and the chaos and the love and the affection- all left behind.


I came to India looking forward to two things and dreading a third.


The two things I came for were Diwali and the launch of my second book.


What fate held in store for Nani (my maternal grandmother)- that I was dreading.


Diwali happened. The book was launched not once but twice.


And we lost Nani.

To go up on stage and laugh and joke and talk about my book when all I could think about was Nani’s death was one of the toughest things I have ever had to do. But I did it, not only because it was the professional thing to do, but also, as cliché as it may sound, I felt that was what she would have wanted.


Nani is gone now, never to return. The finality of it all is difficult to come to terms with but we have the satisfaction of knowing that she lived a long and happy life (she was 92 when she passed away).  She died in the same room she had been brought into as a brand new bride a gazillion years back. A red bindi, a symbol of a married Hindu woman adorned her forehead when she breathed her last.


Her demise has made me think a lot about death. At some level I feel convinced that it does not all end when we die; that there is a great, fun adventure awaiting us on the other side of life; that Nani is thoroughly enjoying hers and chuckling to herself as I type this.


I also feel that I now have someone up there, next to God who will listen to me when He is too busy sorting out the rest of the world. That image gives me a lot of courage.


I know Nani spoke often about my books. She was very proud that I write and very touched that I had thanked her in my first book.  But what Nani liked most was to have a full house. A house that burst at the seems with her 7 kids, 14 grand children and 7 great grandchildren.


At her memorial service as I stared at the hundreds of people who came to pay their respects, I realised that Nani had done it once more. All of us (most of us, atleast) were there, under the same roof, together. My uncles, aunts, cousins and parents bid her her final goodbye with a lot of dignity and respect and as a mother, I know she must have been very proud.


My cousin made a montage of sorts for Nani that day. We switched off the lights and huddled into a darkened room to watch it. Image after image of Nani appreared on the screen. Nani looking stronger than I remembered,  younger than i could have imagined, more serious than she was in her last few months.
Images that contained bits of a life now gone forever, preserved in those (now priceless) pictures. When we switched on the lights, there was not a dry eye in the room.


Today in the train, as it chugs to Delhi Railway Station, sitting next to me is a thin, wrinkled , yet oddly robust looking retired Army officer. He says he is 94. I have been helping him with whatever it is that I can- simple things really- opening the food packets, helping him walk, simply talking to him etc.


A few minutes back completely out of the blue, he turned around, folded his hands and with a warm, kind smile blessed me and told me that he is very grateful for my help.


‘No, No’ I said hastily ‘ its my pleasure. And really, to be honest, I am helping you for very selfish reasons. I have four grandparents , all of them your age. If I help you, maybe someone will help them when they need help’


And then I stopped short, as another unexpected wave of grief hit me.


‘Not four anymore’ a soft voice inside my head said to me reminding me yet again of the void that Nani has left behind in many lives. 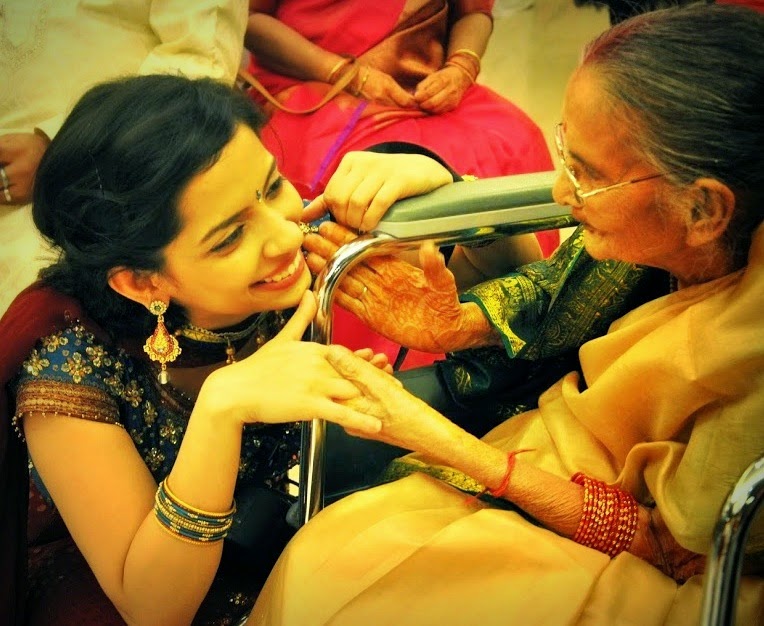 Rest in peace, Nani, and come back to us as you promised me multiple times the last time we met. I wait patiently to meet you again in a few decades.
Posted by R at 9:50 AM 10 comments