Breakfast in London, lunch in France and dinner in Belgium!

This year, so far, I have only travelled to the Canary Islands in Spain. We went there for my 16th birthday.  Okay i turned 16 many years ago...lets just say I am a twenty something who does not like to share her actual age!

We have travelled less this year mainly because of two reasons.

First it has been very very cold in this part of the world and second, Sid has  been extremely busy with work for the last couple of months.

Anyway, coming to today. We are finally travelling again and  I am sitting snug in my room in Hotel Navarra ( good, but not great- more on that later sometime), Brugge, Belgium as i type this.

Highlights of the day so far:

I leave you with a picture I clicked before we sat down for dinner. Brugge, Belgium :) 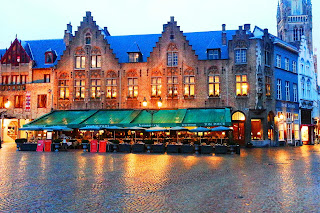 Over and out! I need some precious sleep now!

A piece of lego.

This guy who sits next to me at work can be really funny. A few days back he told me about this friend of his, a lady and her rather strange tale.


So for the longest time ever, this lady thought that she was deaf in one ear. At age 18 she went to a doctor to get that ear checked.
And can you even guess what happened at the doctor’s?
The doctor pulled out a piece of lego stuck inside her ear.
She vaguely recalled her brother putting something inside her ear when they were very little.

The lady, free from the piece of lego lodged neatly inside her ear for the longest time ever could hear perfectly then onwards.

This story really really cracked me up. No one else ( and I have repeated this to many people) has found it funny. I, however, cannot stop laughing even now. When I heard it first, I actually laughed till I cried. In office. No, I am not kidding.