My Nani is very unwell. I was at the Indira Gandhi Airport in Delhi, ready to board my flight in 20 minutes when I called up Nani to bid a final farewell.

I was told that she had gone to the hospital for some checkups. I would have left it at that but I don’t know why I hunted down my uncle’s number and called him so that he could hand over the phone to Nani and I could speak to her.

That’s when he said that Nani had just had a heart attack and had been admitted to the ICU.

I reeled for a couple of seconds. I stared at the flight board and the ‘Now boarding” that blinked stupidly next to the name of my flight and I had a major urge to just leave the airport.

But I did not do that. It did not make sense.

So I came to London. The 9 hour flight was weird and I burst into quiet tears more than once thinking of Nani and how Mum must be feeling right then.

Nani has been in the hospital since the 21st of May and today is the 27th. My Mom has been with her day and night and feeds her like a baby. Life does come a full circle.

During this India trip which was just for 7 days ( which is less considering now I have a sasural to visit as well) I however did manage to go to my Nani’s city. We drove by car and reached her place by 7 in the evening and left at 5 next morning. It was short and very crisp but like all trips there, it was warm and full of a lot of love.

I cannot imagine how terrible I would have been feeling today if I had decdided against the trip due to time constraints. 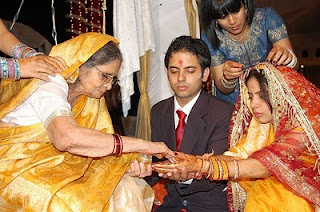 If you can, do pray for my Nani. I love her to bits and cannot stop thinking about her.
Love
RP

Email ThisBlogThis!Share to TwitterShare to FacebookShare to Pinterest
Labels: family

I sleep with Ma and Dad. My brother is here as he is doing his internship and preparing for MD entrance exam. It is, therefore, after a VERY long time that all 4 of us are together.

Sid is in London and though I miss him terribly, I am very glad of this time I am getting with my folks.

It is very hot and we have an AC in each room but still we all (Mum, dad Bhai and I ) sleep in one room. I sleep with Ma and Dad on the bed and my brother studies on his table right next to where I sleep with his lamp on. I fish out my book, New Moon that I bought at Heathrow and read it till late in to the night by the light from the lamp shade. It is quiet except for Bhai’s murmurings as he studies in deep concentration. There is the regular sound my AC makes but most importantly I have my Mum’s arm around me.

Nothing Nothing, NOTHING beats having your Mum close to you. Right next to you. Fingers willingly entwining into yours if you reach out for her hand.

This is what I miss most when I am in London. Ma and her hands. They are quite ugly to look at. Infact if you see her face you would not think the hands belong to this face but for me they are most beautiful hands on the planet.

I sleep in peace.