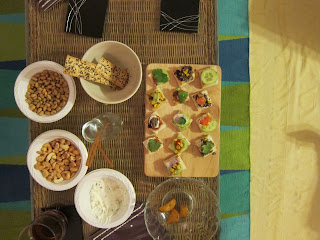 As you can see it has been a busy year. Add to all of the above a book. 2011 saw me become something I never dreamt I would become in my twenties. An author. On the 1st of September 2011, my first book got released by Rupa & Co to a largely positive response. It made to best seller lists, i gave many many interviews (which reminds me that there are two pending sets of questions that I should answer ASAP), I wrote an article for TOI which was met with a great response, newspapers carried pieces on me and TIB, I launched the book in Delhi, i gave autographs, I addressed a crowd of over 500 people talking with them and telling them about TIB, i saw TIB kept in best seller sections in book stores in India. Most importantly, however, I got emails from my readers. They emailed me their love and appreciation for TIB. For that I thank you all.
Have a great 2012 ! I wish you all the health and happiness!

The old world met the new.

My Mum wrote me a letter. Yes, a proper letter. No, not an email. A letter. Written on ruled paper and in Hindi. How charmingly old world-ish is that?

I really cannot recall when I got a letter last (except for the bills that we get in the post here in London).And one from Mum, never before!

However, the letter was not posted to me. Instead, as soon as my mother finished writing the letter, my brother fetched his ipad, clicked a picture and Imessaged it to me.


That is how the old world met the new. But that is not the point of this post.

So I was about to finish work when I got the picture of the letter sent to me by my brother. I squinted here and  there to read it, I enalrged the image, I turned my iphone upside down, I did every thing possible to read the letter till I was able to figure out each and every word.

And then I re read the letter.

And then re re read the letter.

And then re re re read the letter.

Almost tearing up each time I read it.

I will not go into the details of the 2 page letter as it is too personal. Suffice to say that it was the sweetest, loveliest letter I have ever set eyes on. My Mum had been (uncharacteristically, might I add) missing me terribly and she thought of just penning down her feelings.She told me that she missed me, she told me what all she missed ( including me being so busy studying the whole day that I would not even take a bath- how charming :/) and how unfair it was that I now live hundreds and thousands of kilometers away from her.

Anyways, like I said, I read the letter about a trillion-gazillion times.Infact after work that day, I went out with some people to a jazz club. Dimly lit, excellent music, great food. But all I could think of was Ma's letter.

And sometimes, one heart says a little bit and the other heart understands everything.


Like, I said to a colleague the other day while coming back from an amazing meal, sometimes we are so busy living in London that we forget to look at it.


She agreed. We discussed how we can probably describe the road to work (and by road I actually mean the road) and not the people that we (don’t)see or the beautiful buildings that we again( don’t )see.
So that day after work, I stepped out of my office and looked. And saw. And realised what an amazingly beautiful city London really is.
I had never really consciously noted the beautiful architecture of the building bang opposite to office.
I had never paused to admire the understated but immense beauty of St Paul’s Cathedral which I walk past each day to work.
I had never noticed how trees had she their leaves and how pretty they looked decked up for Christmas. Who had put up the blue lights? And more importantly, when?
I had never noticed the little fountain. How pretty that looked!
I had not noticed how beautifully fresh the cold wind that I hid my face from was.
I had not noticed how with approaching christmas everyone was looking happier.
I had not noticed so many many things.
This is life. This ordinary day that has gone by is life. One day has gone past you. It was the day you could have done so much, seen so many things, laughed, joked, clapped, danced…it is gone. A small part of life as you know and (hopefully) love is gone. Just imagine how precious it was.
Sometimes, we are so busy living life that we forget to see. And admire. And appreciate.
I have realised that it is time to change that about me! And I am convinced I will J