On the 1st of November, 2012, I was awarded the Awadh Samman. I have postponed blogging about it for forever now and it is indeed time to change that!:)

As they say, better late than never.

Allow me to begin from the beginning.
It all happened really fast, to be honest. One fine day, I was asked to email to the news channel all the newspaper cuttings, best seller links, interviews I had for TIB and a few days later was politely informed that Zee News Uttar Pradesh and the UP Government would like to honour me with the 'Awadh Samman'.  Wiki link to the award: http://en.wikipedia.org/wiki/Awadh_Samman#Zee_News_Awadh_Samman_Awardees_for_2012

My Award, a HUGE trophy is the Awadh Samman, Young Achiever (Literature) award and they gave it to me for the success of my first book, the three gold medals during MBA and the ranks and scholarships during engineering college. The greatest focus, ofcourse was on TIB.

To say the least, I was shocked! For the longest time ever, it did not even sink in and it was in a daze that I hurriedly booked tickets to India to collect my award.

Zee News UP team was super fantastic all throughout. They actually came home and interviewed my mum, dad, brother, dadi! Here is a picture of my Dad, at my home, giving an interview on me. Allow me a moment- I feel so proud when i see this picture! There is  a similar one with my Mum giving her interview as well. 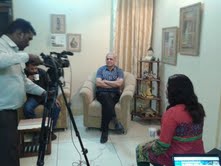 My husband travelled with me and my mother in law came in from Delhi to attend the function. The function itself was very elegant. They sent a senior member of their organization to pick up my family and me from home (as they did for other winners as well) and escorted us to the Taj hotel where the ceremony was to take place.

The room soon filled up with media, politicians, winners and prominent members of the city. It was then , as i adjusted my saree that I was told that the award ceremony would be telecast live on not one but two channels (one state and the other national).

I refused to panic then. Afterall, all i needed to do was to walk up and take my trophy and walk back down.

As the ceremony started, I realised that i would have to give an acceptance speech as well! Yes, the event was being telecast live on not one but two channels and i was supposed to give an acceptance speech.  As people went up to the stage to receive their awards, I was amazed and humbled at the people I had been grouped with (including padmabhushans). Interestingly, it included Prof HC Verma whose books I had devoured while preparing for IIT-JEE.

I was given the award by the Chief Minister of Uttar Pradesh, Akhilesh Yadav, and whatever his political ideologies might be, I took an instant like to him for his gentlemanly ways.

For those who wanted to know, my acceptance speech was tiny. I just thanked my family who had travelled across the country and the world to be with me. I thanked them for their support, for believeing in me for standing by me.... Without them, none of this would have happened. They are, like i said then, the wind beneath my wings.

I never thought i would write a book so soon. And even when i was writing it, it was all really song and dance for me. I would write and then laugh and then write some more. Never, in my wildest dreams did i think that i would be on TV one day, receiving an award and giving a speech!

For those interested, here is video clipping of yours truly getting the award.

Thank you, once again, to every one who read TIB. I heart you.
;)

Six things that made me happy today #4

Six things that made me happy today #3

If you liked reading about simple things that made me happy today, why don't you tell me what made you happy today?

(Shessh! Almost wrote 'Thanks and Regards'!)

Six things that made me happy today

1. Chole is ready! Yeay! All i need is to heat it and dinner, thou shall be served! Wohooo! (When you have cooked for 2 for over 3 years, you will understand what a great joy that is!)
2. I am looking forward to my dance class that shall begin in another hour and a half. Its a great work out and I love to dance.
3. It was sunny today. I dont particularly enjoy the sun, but it is good to get some vitamin D every once in a while.
4.Had a good catch up with my super busy brother. He will be travelling to London soon and i cannot wait.
5. Had a long discussion with Ma as well. As always, I feel so much better after speaking to her.
6. Had a quick chat with Dad too. He likes the chapters I sent to him for feedback. Yeay!
Posted by R at 5:54 PM 5 comments