So I am now waiting. At a bus station. Only thing is that the bus station is on water and is swaying gently. The water bus should here soon to take us to the railway station. And off from Venice we shall be.

My thoughts on Venice? Well it is the most unique city I have ever set my eyes on. There is some thing so magical about this place that I have been swept off my feet. The last this happened was with the taj mahal.

So picture broad narrow roads. On either side are houses/ palaces from the 15-16th century. Most houses have a car park and a car. Now replace the road with the gently swelling blue green waters of the canal, the cars with beautiful gandolas or boats and the car parks with boat parks. Add quaint bridges every where. Add tinybeautiful restaurants with green canopies and a multitude of flowers. Add gorgeously dressed women. Add men with long hair. Add dogs better turned out than the women. Add those gorgeous colourful Venetian masks. Add charm, grace and immense beauty. And voila! You have Venice.

It's a flowing, swelling, ebbing city.

And yes we did take the gondola ride. We were taken through the narrow lanes of water in a beautiful black gondola as the sun set. Our gondolier, Alex, told us bits about the city and layer as the chatter died down broke into an Italian ballad. I don't know what it meant, he was not even singing too well but it just added to the atmosphere.

We had taken the water bus passes and hence explored the grand canal well into the nights. And how beautiful the warm yellow glow of the lights looked reflected in the waters of the canal.

The only sour bit about the city were some of the locals who were quite rude but then well maybe coming from London India where people are generally very polite, we probably had high standards when it came to the spoken word.:p

To all the people who have asked for pics , they will come once I am back in London.:)

Now off to Florence and then home to London. Bye bye magical Venice, you are beautiful.
Posted by R at 7:31 AM 13 comments

So I am sick.since I came to London in jan 2010 I have never been sick. So much like me to fall sick on the first day of our 10 day trip to Italy. Anyways

Gorgeous.that's the right word. I am down and out with fever and am coughing like an old woman but I am intrigued and amazed by the beauty of Rome.

Every turn you take in the older parts of the city and you come across something that atleast looks very historic and important. There are painters and musicians. Desi/Bangladeshi men selling silly toys you would consider outdated for our local melas, Italians ones playing musical instruments or singing. Artists sit on the side of the road and with a cigarette tucked between their lips spend hours painting.

The pebbled streets, the cafes, the food, the music , the art, the beauty...

It is a must visit for all the history enthusiasts!

I know what the critics say about Rome. It's dirty, unsafe and third world-ish. I agree. I crinkled up my very London nose as I surveyed the Rome metro. Sid added that Delhi metro has to be ten times better. We felt very superior but then there is the spirit of the city. The sheer beauty and history.

We had lunch at a cafe right opposite the pantheon today . Pony tailed men sang, pigeons strutted around, old aunties with dogs with red bows smoked cigarettes and drank wine. Life seemed so lazy and relaxed. That is probably what Rome is. Too beautiful to be bothered by harsh things, too steeped in history to be affected adversely by the modernity that surrounds it and too free spirited to be bound....that for me sums up the spirit of Rome.
Posted by R at 9:33 PM 9 comments

Hi again! So I am sitting in the dlr on my way to the airport.we are off to Italy for the next 10 days! People tell me that it is very easy to fall in live with Italy..let's see how it goes!

It has been extremely busy and very stressful at work of late and j will be glad when this phase of work is done with...will post more stuff when I get back from Italy :)

So we went to Nice last Friday for a quick 3 day break. And what a lovely trip that was.

We boarded an early morning (8:00 am ) flight from London to Nice and arrived in this lovely city by the Meditteranean Sea by 10:30 am their time.

Reached out hotel and after putting our stuff their set out for a tiny little town called Antibe. The plan was to do day trips and spend Sunday in Nice. And trust me, Nice is a lovely base for some excellent day trips.

The train/bus/tram system in Nice and around it is extremely cheap. One pound in London is useless,but you get a proper train ticket in one euro in Nice. Works well with me! 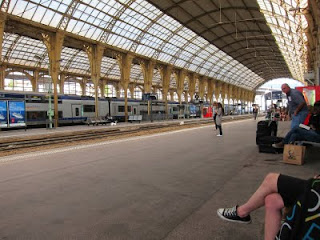 Arrived in antibe half an hour later. And what a delightfull little town it turned out to be. We walked around quite a bit. The sparkling blue meditteranean Sea, the white yatchs, the bright Sun. Lovely! 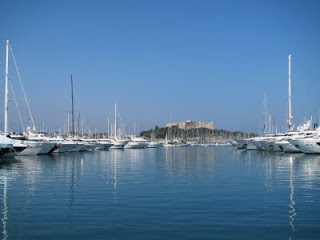 Walked to the Pablo Picasso Museum. Looked at some of the paintings made by him andothers. It was here that Pablo spent some painting because he felt inspired by the beauty around him. Looking at the view around the museum. I was not surprised!

View from the Museum 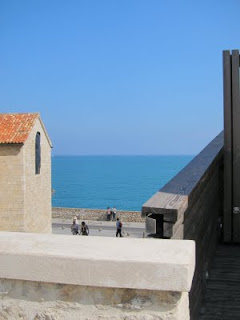 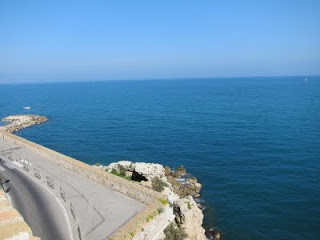 Once we had trekked up the museum and spent an hour going through the paintings, we walked down to the Antibe beach. I spent 2-3 hours there. There were young people, some children some oldies relaxing on the beach. It was just such a spectacularly beautiful beach. Also, importantly it was one of the few sand beaches around.

Once done, we came back to the city and loitered around, looking at shops and walking through quiet lanes. It was a charming little place. Here are some random pictures: 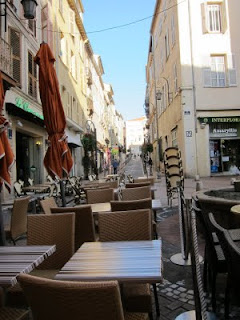 Had something to eat and came back to Nice by 7 pm, quite exhausted. Took a shower and went out to hunt for food.

Nice is lovely by the night. There were many tourists and all the places were so well lit up and welcoming. We just walked around, tired and exhausted but loving the whole experience of exploring an unknown city.

Is not this spectacular? 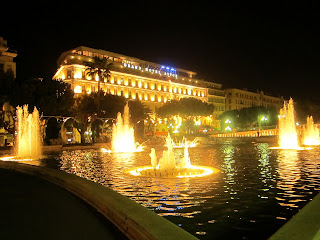 We walked into the old city known for its charming alleys and lovely food stalls. Had dinner, explored some more and came back absolutely, totally exhausted.