So she comes to my house once a week for three hours. Sometimes she stays a little extra and sometimes i give her extra money  for no reason. She comes with a smile on her face, does her job and goes away.

Over time, we have begun to speak quite a lot and i find myself looking forward to her visits. Through broken English, I have managed to piece together some bits of her life and it is, i feel a remarkable tale.

So here, we go, the little i know about my cleaner (I will call her A).

She is 29 years old and speaks heavily accented English. She is also double my height and triple my weight ( and i don't mean this in a mean way...she is just that way). A comes from a small city in Southern Poland and has a bachelors degree. The degree however, is of little use, because she cannot speak English ffluently enough.

The youngest of three sisters, by the time she was 15, she had lost both her parents to heart attacks. It was while hoovering my living room that A recounted the horrifying tale of how being trained in first aid, she tried to revive her dying father on the stairs in her ancestral house.

'My mother died in her sleep' she says with a sad smile ' so it was better...'

Her eldest sister married some one in England, and brought her two sisters to live with them. Unable to find work, A began to clean. Along the way she made two friends. A girl she met through some friends and another man (R)she became friends with through some other acquaintances.

Soon, she began to date the man. One day she she tagged the pictures of her boyfriend on facebook. Her friend called her immediately.
'How do you know that guy?' the friend asked.
'He is my boyfriend' A said ' do you know him as well?'
'Yes'
'How?'
'He is my brother!'

That happy co incidence out of the way, A and R began a life together in London.

'So' i asked her the other day ' how long have you known R for now?'
'5 years, Madam' she said laughing.
'why don't you marry R' I ask gently teasing.
She laughed again and shook her head.
'No? why not?' i asked curious.
'I don't trust him'
I did a double take.
'Why?'
'Because he cheated on me'

The ups and downs in their relationship continued and it was while they were on a break (and in a very Ross- Rachel' way) R slept with A's friend. 'A' found out about it once they were back together...Apologies followed, another break up happened but A decided, in the end and much like Rachel, to take him back.

Yesterday we were talking about kids, about R's 15 year old daughter from a previous marriage.
'Does not your R tell you that he wants to have more kids?'
She giggled as she neatly folded the clothes.
'Oh yes, he does...but the doctor said that i cant have kids for another 3 years'
I sit up straight. I don't want to ask further but still i do.
'Is everything okay?'
She laughs again.
'Oh yes, now it is...but i had cancer last year'

I gulp. Again i don't want to know but i know that i will ask.

'Which cancer was it?'

After much explanation, i figure out that she was diagnosed with cervical cancer two years back and is in remission now.

'It was not that bad...you know...my best friend had some other cancer the same time...so i had someone...'
I shake my head.

She looks at me, probably taking in my shocked face.
'No, really, it was not that bad...I just told my family to tell me what i  needed to do and simply did as told. I did not even ask them about what would happen...Every three months i go for a check up and so far it is all okay...'
I stare at her as she speaks in the middle of nervous bouts of laughter.

'No really...' she says again and again more to herself than to me ' it was not that bad'

And then she goes on to tell me about last week when she locked herself out in the balcony. She waited there, in the cold for 4 hours, unable to come back in, till the landlady came back from office. We are both in splits by the time she finishes her little story.

'I hope my 30s are better' she says laughing, referring to being out in the cold for 4 hours.
'I hope they are' i say thinking about her parents and health.
Posted by R at 12:22 PM 7 comments

I wear many hats, often more than i can easily manage on my little head.

Most of the time, i spread myself too thin with my hands in many and varied projects. That is really odd because for the longest time ever, my life was only about one thing. Academics.

Anyway, so one of the many things I am dabbling in at the moment is dance. I have always had a love hate relationship with it and it is only recently that i have really begun to enjoy it. Twice each week, we get together in a dance studio situated in what can best be described as a quirky part of London and dance our stress away. There are 15-20 students in my class, mostly working professionals from different parts of the world and the country with one thing in common- love for bollywood and dance!

This Sunday I performed on stage for the first time in like 200 years. It was just a 3 minute performance for which we had spent weeks practising- but in the end it was so worth it.

The noise, the lights, the cheering, the butterflies in my stomach, the 'i think i have forgotten all the steps' looks exchanged with the group as we waited for our turn, the anticipation of it all and the fact that no one (read NO ONE) goofed up!

There is, indeed,  something extremely special about being part of a bigger group where the 'we' means more than the 'I'. We performed to 'Pandey Ji' and I don't think i will ever be able to listen to that song again without my shoulders moving involuntarily :-)

While i anticipated many benefits of dancing ( my body is more toned, I definitely feel that my stamina has increased, I feel extremely good after the hour long work out etc etc) there is another angle that i had never anticipated.


Leaving you with some pictures from the last class of the term.

Listening to final instructions from our instructor. 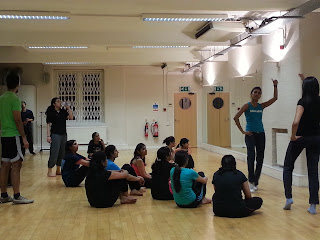 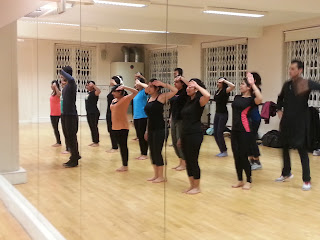