Its 6:30 in the evening. I have wrapped up work for the day and familiar feeling of a day well spent in chasing people least interested in being chased kicks in. I have also just baked cookies for a friend who got married recently and dutifully sent her a picture of the cookies that i would bring for her the next day.

'I am coming, these look too good to wait till tomorrow' she replies. So there she is, her mehendi still visible and wedding ring glittering gobbling up one cookie after the other obviously making up for the months before her wedding she was on a strict diet.


She shares with me the million stories that only a new bride can have (including some absolutely hilarious ones). The two of us sit in the balcony and i wrap a throw around my shoulders to protect myself from the slight chill in the chair. She politely declines the offer of something to keep her warm.
The grey, serious Thames rumbles around us as the grey skies look on benignly. On the marble table top in front of us are two cups of hot ginger lemon tea (healthy), sprouts ( healthy) and freshly baked cookies (divine) that i have baked to mark her recent wedding.
And we laugh non stop at the stories she has. Family both hers and his. The new husband. The wedding ceremony itself. It is all hilarious. The conversation turns more serious then. We discuss emotions, conflicting ones. And the struggles, the difficult ones...

For her new husband i pack half a dozen cookies. Half a cookie finally reaches him. The rest, my friend eats on the way home.

Four of us girls meet up at a fancy restaurant in Central London. And get border line bored (which is very rare given that we are all nautanki lovers and share a common passion for all things Bollywood). The food is great and we hog. Chat a little bit, not much though...maybe because everyone is tired after a long day at work. Giggle. Pull each others legs. Time to go home.
And it is when we are at the Waterloo station about to get into different trains that it begins. As one leaves, the others cling to her. No, we cant let you go, we yelp and that is the start of madness. Suddenly we all have soo much to say. And then this. And that. And another round of mad laughter. Someone says she wants to do the whole ring-a-roses thingie and we need to remind her that we are in a station. Someone suddenly spots a devilishly handsome guy. Someone says something else. Suddenly everyone is saying something and no one is listening.

We stand at the station for close to half an hour jabbing incessantly about everything and nothing!

And this:
So this friend from work is getting married, bless her. Three of us decide to go out for a quick drink before we send her off to India for the ceremony. The 'quick' drink lasts close to 5 hours.
5 hours of non stop (and i really mean this when i say it), nonstop laughing-till-my-stomach-hurts waali laughs. I am taught abuses that i have never even heard before that scandalize and amaze and excite me in equal measure. (Later I come back home and proudly inform my husband that I now know mannnnyyy abuses. As i rattle them off, Sid can barely contains his snigger)

We give the soon to be bride the all important lessons for a happy married life, lessons that can only come from happily married women (eg: Don't cook for your husband. Don't listen to your mother-in-law. Ever).

We first order the main course. Then desert. And then starters. No one gets a 'drink'. As we order the starter after the dessert, the very high browed waiter gives us a look that for no reason sends us into fresh peals of uncontrolled laughter.

I am surprised to see that the call lasted over 2 hours; certainly did not feel that way. As i end the call, I have the widest grin on my face and I think my friend does too :)


The train from Brugge to Lille, France has just chugged off and I must take this time to put down the highlights of day 2.

Since I did my MBA in India, I can only express myself in bullet points, so here we go:

• Boy, did we walk! The cobbled streets which seem so romantic at first glance are so so difficult to walk on! Most parts of Brugge are cobbled and we walked pretty much non stop the whole day, so you can do the math while I rub my legs that are still smarting!

• It was sunny and the city seemed to come alive from the dead. There were people everywhere, dressed in their sunny bests, the duck came out, the musicians sang and the horses clippity clopped happily. The cafes around the main square were overflowing with people laughing and talking….it was a pretty sight 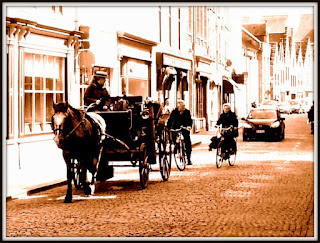 • We walked around the canals soaking in the sunshine and hoping that our bodies were happily churning out the much needed vitamin D ( It is so bleak and grey in London all the time, that most Londoners are deficient in Vitamin D!) 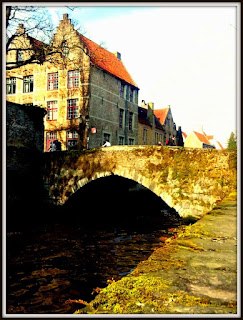 • Instead of doing the usual sit down meal surrounded by 200 pieces of cutlery, we decided to do a cheap take away. Greasy pizza and burger in tow, we had our lunch with trees around us and the canals in front of us. (Side note: it was the first time I actually saw a duck fly!)

• A little later, as we walked further, I came across a little river with a cluster of trees beside it. It was so pretty that it seemed like it was a picture in a book. It was fairly deserted, with a boy and agirl in one corner…err…doing their thing. Sid and I steered clear of them giving them the privacy that they did not seem to need and sat down to take in the beauty….It was absolutely heavenly 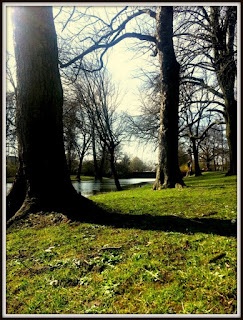 • I bought, as usual, a hand made painting from a local artist –this time depicting the canals of Brugge

• We resumed our walk a little later and chanced upon a flea market which sold really weird stuff (including Pantene shampoo- why would anyone sell that in a flea market is beyond me!)

• By now we were both very tired and had been walking in the sun for over 6 hours. Exhausted, we headed to our hotel.

• We came out again for dinner (a proper sit down meal in a fancy Italian restaurant that had multiple vegetarian options for me to choose from) and had decided to head back but then again, the pretty little city was screaming out asking us to walk so we started off again..

• The city was even more gorgeous in the night, with the warm glow from lamps lighting the cobbled streets, the canals reflecting the light from the buildings around them and the gentle coolness of the air….i think we walked for over two hours again… and let me rub my feet again! 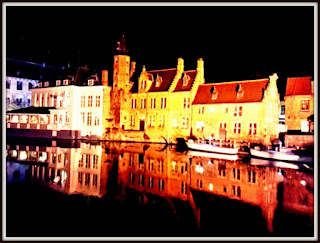 • There is this portion of the city overlooking the canals (I did not catch the name) that has a HUGE weeping willow tree drooping its melancholy sadness into the still, clean waters. There was something so mesmerising about it particularly in the nights when the buildings around it were reflected dot for dot in the waters….

Today, we spent some more time exploring the city, walking our favourite paths before getting on this train that will take us to Lille for some office work.

Over all, Brugge is more like Amsterdam than Venice. It also reminded me a lot of Prague and Salzbourg. Its quaint, its pretty….there are not many touristy things to do (for that please head to Rome, Paris and London) but it is the right choice for a quick, relaxing get away from the madness of London. 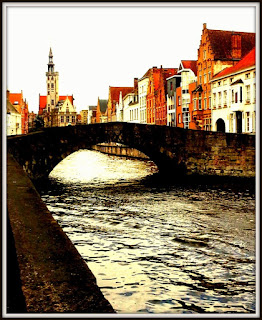 And finally, for the first time in the eight year history of this blog I have finished a travelogue! *victory dance*

PS: Please do not reproduce the pictures without permission.